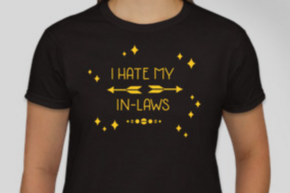 Roger was happily married to Julie until his in-laws move in.

I HATE MY IN-LAWS is a sitcom with six main characters, Sue, Roger, Wendy, Nathan, Martha and Julie.   Sue is the mother of Julie and Wendy.    Julie is a newlywed, married to Roger who is the center focus of the confrontation with his mother-in-law Sue, and sister-in-law Wendy, who recently moved in with them.    Roger has one brother, Nathan; their mother Martha is recently widowed.

In season one, Julie and Roger are expecting their first child.  Sue is hoping to stay with them until she remarries.    Wendy is planning to remain in the household until she finishes college and law school.  She is dating a star college basketball player.  Nathan is in love with Wendy, although he hooks up with another woman and gets temporarily engaged.     Martha works on finding a new companion.

Season one has 20 episodes that have already been written. Sketches for season two are already in progress.